From the top of Badbury Rings you can see the expanse of the Chalk downland to the west and north, and the slope of the land south-eastwards towards you. On a clear day you may be able to see the highest point in the north at Win Green. Towards the south the Chalk ridge of the Purbeck hills forms the horizon. 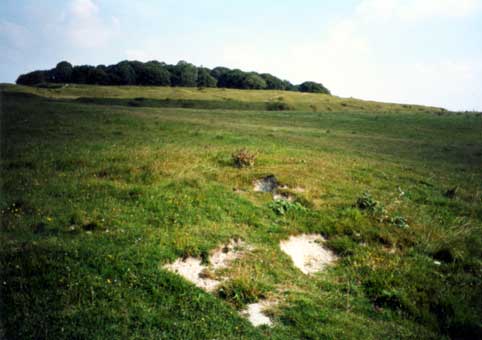 The Chalk escarpment runs from Melbury Hill southwards to Hambledon Hill and Hod Hill near Blandford. The highest points on the Chalk are on the escarpment at Melbury Hill (263 metres) and farther east, in Wiltshire, at Win Green (277 metres). 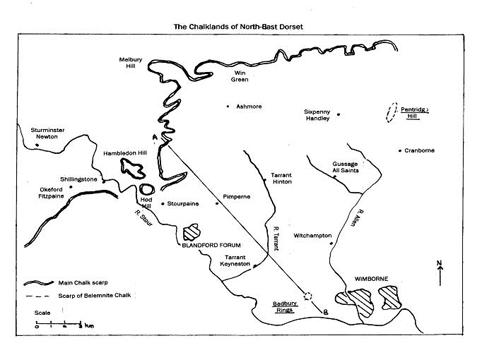 The Chalklands of north-east Dorset slope south-eastwards from that high crest to where they eventually meet the outcrop of younger beds, the Tertiary sands and clays, in a zone that runs north-eastwards from Wimborne to Fordingbridge. Here the Chalk disappears beneath these sands and clays only to reappear again in the Purbeck Hills and the central ridge of the Isle of Wight. The Chalk has been folded downwards in a huge geological basin, traditionally known as the Hampshire Basin, that extends from the Frome syncline (downfold) towards Dorchester, eastwards to Selsey Bill.
Breaking the even slope of the Chalklands from north-west to south-east is a discontinuous line of hills formed by a harder band in the uppermost parts of the Chalk. This is known as the Belemnite Chalk (after one of its commonest fossils, the belemnite Belemnitella mucronata). The most prominent of these hills is Pentridge Hill, close to the Hampshire border, but Badbury Rings, crowned by its hill-fort, is another significant landmark, dominating the Chalk country to the south-east of the Tarrant valley.

Section across landscape from A to B

The Chalk is a fine grained pure white limestone laid down in a relatively shallow sea that covered much of Britain about 70 to 90 million years ago. The Chalk is made up of the remains of minute planktonic marine algae, known as coccoliths, but it is thought by some scientists that the algal fragments were too small to fall freely to the sea bed. It is now suggested that the algae may have passed through the digestive system of microscopic shrimp-like creatures before becoming solid lumps of excrement that were heavy enough to fall to the seafloor.

The Chalk also contains fragments or occasional whole fossils of a range of other organisms, such as bivalves, brachiopods, ammonites and belemnites. Within the Chalk bands of flint are common, usually parallel with the beds of the Chalk, but sometimes cutting across them. The flint nodules are made up of microscopic quartz crystals, with the silica from which they were formed coming either from sponges that lived in the Chalk seas or from the skeletons of diatoms. The gel of partly dissolved silica may have filled burrows made by crustaceans. After the Chalk was deposited it was lifted above sea level by the movement of continental plates, folded into the shape of a basin and eroded initially by rain and rivers, later by a new sea flooding in over the area in Tertiary times, about 60 million years ago.
As an erosional remnant on the dip-slope of the Chalk of north-east Dorset, Badbury Rings is of considerable geological interest. It stands out as a landmark from the surrounding rolling Chalk downland because of a slightly harder band, known as a hardground, (more resistant to erosion) in the Belemnite Chalk of which it is composed.
Capping the summit of Badbury Rings are rocks of an entirely different nature. Visitors walking up through the ramparts of the hill-fort will notice in the footpaths that there are many small rounded flint pebbles present. These pebbles have been formed by erosion of the Chalk flint bands during millions of years as dry land and reworking on an ancient beach, like a present day shingle beach, as the sea returned.

It is possible that these pebble beds (Palaeocene) and succeeding strata of early Tertiary age (Eocene) covered a much wider area than that which they now occupy as outliers on the summit of Badbury Rings, and nearby outcrops at King Down Farm and Kingston Lacy. They also occur on Pentridge Hill and around Cranborne. It is likely that the pebble beds have been eroded away from the surrounding area to reveal the Chalk surface on which they were initially deposited, known as the sub-Eocene surface. Having been once buried, this surface is now known as an ‘exhumed’ surface and forms much of the rolling downland to the north-east of Badbury Rings.