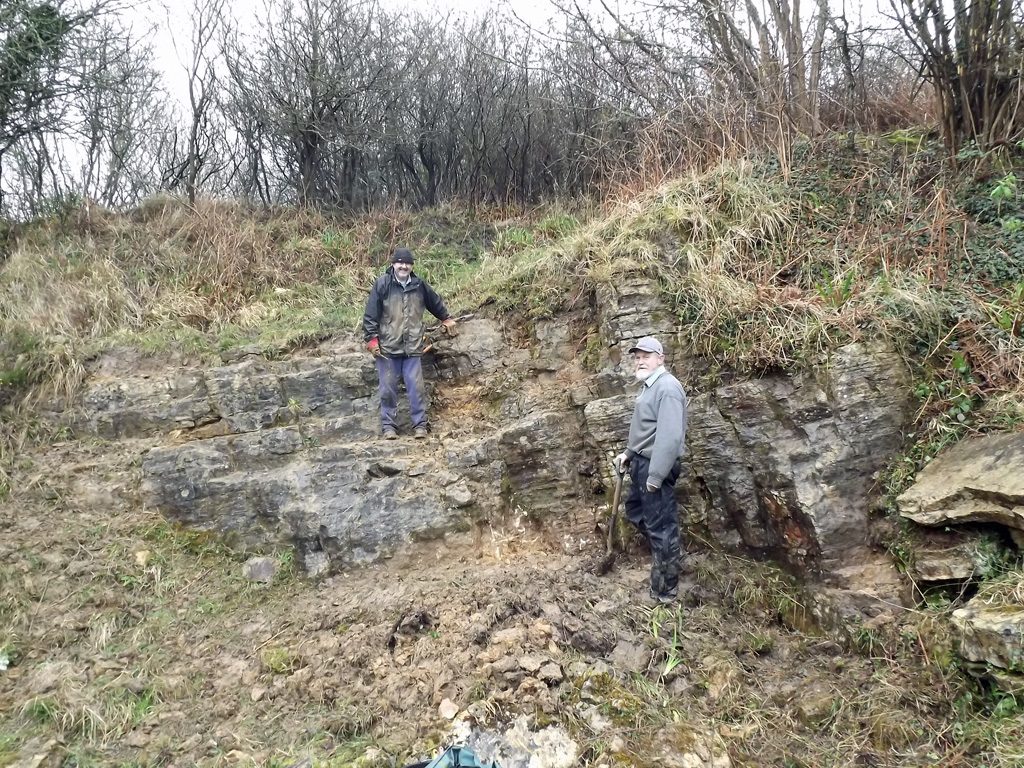 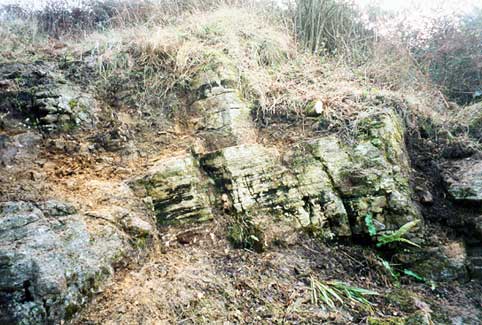 Geology: Lower Cretaceous, Purbeck Limestone Group.
Section of Broken Shell Limestone, known to quarrymen as Burr, used as ashlar in many medieval buildings. Remainder of quarry of historic interest only, as one of a series of quarries which were the source of Purbeck Marble.
Access: Public footpath from Langton Matravers.
Parking: On road at Langton Matravers, or in National Trust carpark at Acton.
Size of party: 25
Education level: A level/University

How to find Crack Lane Quarry

The steep hill-slope to the north of Langton Matravers village follows the dip of the Upper Purbeck limestone beds. Crack Lane runs down this slope from the eastern end of the village, past the cemetery, to join the lower Corfe Castle to Swanage road at the sharp bend just south of the railway bridge.

The entrance to the quarry is just below the main gate to the cemetery (SY999.793). Follow the footpath southwestwards until you reach a large hole with boulders scattered around. This is a quarry that was last worked only about 30 years ago, and one face of the Purbeck Burr limestone remains in the southeast corner.

In Roman and medieval times the Purbeck Marble was quarried at the foot of the slope, near the stream, but only overgrown waste heaps can now be seen in the woods. On the slope above there were medieval quarries in the Burr (Broken Shell Limestone to the geologists).

Crack Lane Quarry is the only one of the Burr quarries where the stone is still visible in its natural place. It has therefore been registered as a Regionally Important Geological Site. These are protected from damaging development in the same way as Sites of Nature Conservation Interest and are chosen by local geologists on the criteria of scientific importance, historical interest, and educational or aesthetic value.

Crack Lane Quarry would be a safe place to study this particular bed of Purbeck limestone, and is of historic value as it represents an ancient industry.

Life and times of Purbeck limestone

The Purbeck Limestone Formation is a rapidly changing series of limestones and lime-rich clays that formed in fresh or brackish water lagoons. The Burr and Marble beds are the youngest of the series and formed in freshwater, but the environmental conditions must have been very different to support such contrasting communities. The Burr consists of the broken shells of Neomiodon bivalves, while the Marble is packed with Viviparus gastropods.
The remains of fishes, turtles, crocodiles, insects including dragonflies, the teeth of small mammals, bivalves and gastropods, as well as the tiny shells of ostracods, have been found in the other limestones and clays. There is some fossil wood, particularly in the oldest Purbeck beds and many of the limestone beds bear the impression of the footprints of dinosaurs large and small. For several million years this must have been a varied and rich community.

Structure of the Isle of Purbeck

The lime muds and the remains of all these creatures were covered by later deposits, (firstly the Wealden sands and clays found in the valley that runs from Swanage Bay to Worbarrow), and hardened into rock over millions of years. When continental movements caused pressure from the south these thin beds proved the weak point in Purbeck.

There are many folds and breaks which the quarrymen uncovered during their work, and must have caused them great trouble and danger when they mined the stone in underground galleries. The main dip, or slope, of the Purbeck Limestone beds is northward. The fields north of Langton Matravers follow this dip, and a section cut through the beds can be seen in the cliffs of Durlston Bay. From the faulted area by the old Zig-zag path northwards to Peveril Point you can go from the oldest to the youngest beds of rock.

On Worbarrow Tout it is perhaps easier (and certainly safer) to follow the sequence, from the oldest at the seaward end where the thicker Portland limestone forms a barrier to the sea, to the beginning of the gravel beach where the Marble can be seen at low tide. Both places are only accessible when the tide is low, and helmets are advisable, as rocks can and do fall frequently. 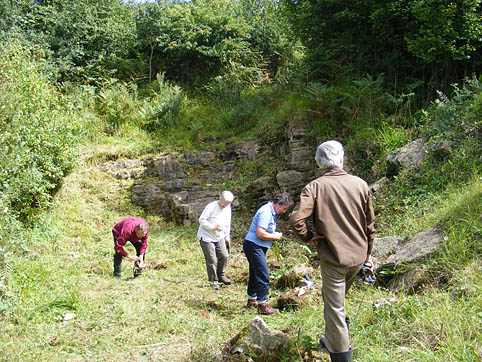 Hundreds of tons of building stone have been taken from Crack Lane quarry, some being used for bridges over the Swanage Railway, built in 1884. It was last worked extensively in the 1920’s, and sporadically up to 1980, when it was partly filled in. The area remaining is strewn with blocks of unused stone, and one face of rock can be seen in its natural place, showing two thick beds of limestone. This is the Broken Shell Limestone, known to the quarrymen as Burr. It is a pale biscuit colour when fresh and is made up of small white bivalve shells – Neomiodon – cemented together with limestone from broken shells which dissolved and then reprecipitated as powdery lime mud in the warm, shallow lagoons. The face is now covered in lichen and should not be hammered – the loose rock can be used to obtain a fresh sample.

Stone from earlier quarries in the Burr on the north facing slope of the hill was used as ashlar (squared blocks fitted neatly together), particularly in the 12th to 15th centuries. It can be seen in the Norman tower of Studland church, in the castle at Corfe, and in Worth Matravers church. When fresh cut it has a pinholey texture. Centuries of weathering begin to dissolve the surface, enlarging the holes to produce a honeycomb effect. This is so distinctive that it can be recognised in buildings as far away as the east wall of Milton Abbey, and the remains of Tarrant Abbey at Tarrant Crawford farm. The door jambs of St. Aldhelm’s Head chapel are a particularly good example of this honeycomb weathering effect.

Of the hundreds of different beds in the Purbeck limestone, the ones most suitable for building are remarkably similar. Subtle differences in texture enable the experienced quarryman to identify them precisely, but the New Vein, the Downs Vein, the Freestone of the Freestone Vein, the Laning Vein and the Burr all contain the same bivalve Neomiodon, and are all cream in colour. However, only the Burr and the Freestone are in beds thick enough to cut as blocks of ashlar. The Freestone was used in later buildings, starting in the 17th century, and its use increasing considerably in the 19th century.

North of Crack Lane Quarry the disturbed ground of waste heaps from the Marble quarries can be followed right through the woodland to below Quarr Farm. The beds of Purbeck Marble, blue, red and green (which often appears grey) can now only be seen at Worbarrow or at Peveril Point, where they form the reefs in a U shaped fold. The Broken Shell Limestone is clearly seen in the cliff and follows the Marble in the fold. The fold runs from Peveril through Swanage into this quarrying area, so that the beds seem to appear twice, very close together. The Marble was quarried all the way past Quarr and Downshay as far as Blashenwell.

It is not a true marble, but a limestone which will take a polish, and was used for monuments, fonts and decorative columns inside churches, particularly during the 12th to 14th centuries. When exposed to the weather the surface tends to deteriorate and turn cream, but it remains fresh and polished inside churches throughout England.
The marbles contain the fossils of tiny freshwater snails – Viviparus – that appear as whorls cut across in different sections. The red and green marbles contain fewer Viviparus gastropods than the blue, but have some large bivalves – Unio.

The red colouration is due to the weathering of iron-bearing minerals, which when fresh are green to blue-green in colour. Although the red and green marbles have been used in a few cases, such as a floor slab in Whitchurch Canonicorum church (West Dorset), most examples are of the blue. The load bearing piers in Salisbury Cathedral have bases of the blue marble in their natural bed position, while the long shafts have been made from long pieces stood on end. Carving and polishing was done mostly at the quarry or in workshops in Corfe, though it is possible that the finer work, which might have broken in transit at sea, was done by craftsmen at the site where it was used. Many of the effigies have common features in their design and were made in London workshops.