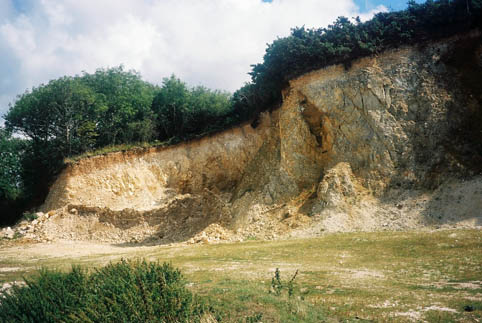 Rollington Farm Quarry has been excavated in the side of a north-west/south east trending valley that cuts through the Chalk ridge east of Corfe Castle. Material is occasionally taken for road-mending within the farm, so the exposures will change over time.

The valley apparently results from the erosion of a fault zone, one of seven sets of faults through the Chalk ridge that were the result of strong earth movements about 20 to 25 million years ago. The most obvious result of these movements (known as the Alpine movements) is that the Chalk has been folded very tightly so that the beds are almost vertical on the northern side. Because of the tight fold the Chalk ridge is less than 0.5 km wide.

The fault movements have shattered the Chalk, so that bedding is not obvious. The broken pieces often have manganese staining on the surface, and the texture of the Chalk has become ‘porcellaneous’, or smooth and almost shiny.

The quarry exposes Upper Chalk of Campanian age, in the Portsdown Chalk Formation, referred to locally as the Studland Chalk. The Chalk was originally formed on the sea bed, from the calcite skeletons of planktonic algae that bloomed in subtropical waters. About 65 mya a combination of earth movements and a major global fall in sea level transformed most of the British Isles into land, gently folding the Chalk and exposing it to erosion.

There is a major time-gap of around 15 million years between the Chalk and the Reading Beds (Tertiary, Danian) above. During that time the later Campanian and Maastrichtian Chalk were eroded away. The Reading Beds are mostly red-mottled clays with organic material that formed from soils on land close to the sea, and some sands, often cemented by iron, representing beach deposits.

From a distance the Chalk appears to have a brown coating, but this is only a colour staining. There are two ‘pipes’ filled with Reading Beds material where rain filtering through has dissolved the limestone underneath. These ‘pipes’ or ‘dolines’ are common across Dorset where the Reading Beds rest on Chalk. When freshly cut the infill appeared to be in layers, as if deposited at the same time as the deposition rather than at a later date. 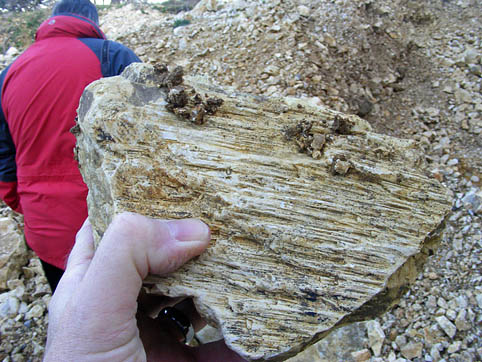 Parking: Minibus or 3 cars in farmyard.