Stonehill Down and the Cocknowle Gap SY926822 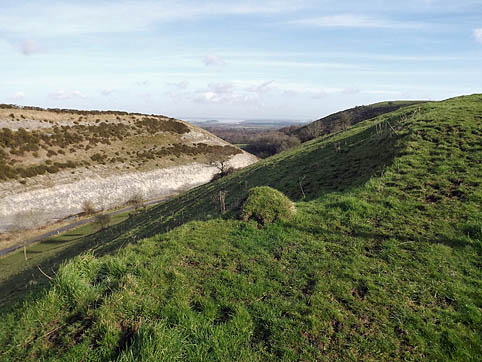 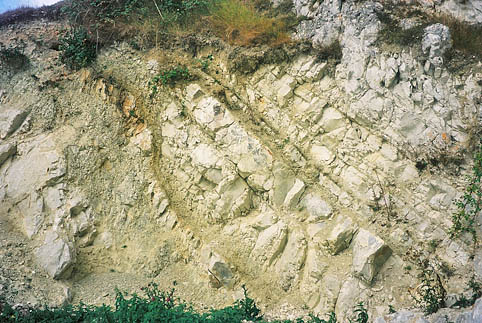 The Purbeck Chalk ridge runs from Arish Mell in the west to Ballard Point in the east, reaching maximum heights of 198m near Grange Arch in the west, and 199m at Godlingston Hill in the east.

The continuity of the ridge is broken by three high level cols or wind gaps in the west, at Tyneham, Lutton and Cocknowle, and by gaps cut by four flowing streams, at Arish Mell in the west, at the double water gap at Corfe Castle in the centre, and at Ulwell in the east. A number of other remarkable valleys have been cut in the ridge although they are all now dry.

One of the most notable of these is at Cocknowle, where the valley has been cut parallel to the ridge in its upper course, but then turns abruptly to leave the ridge through an almost gorge-like exit in a north-easterly direction. There are thus two features of interest at Cocknowle, the high level col, and the dry valley cut in the ridge at a lower level.

The high level col at Cocknowle, together with the others to the west at Tyneham and Lutton, represents an early stage in the evolution of the drainage pattern of the Isle of Purbeck. All three cols cut across the structural grain of the ridge, and it is likely that the streams that cut them have developed on an uplifted Pliocene sea floor, and have been superimposed on the east-west trend of the ridge.

The Pliocene sea would have cut an erosion surface across all of the strata in Purbeck. The streams that developed on this surface when it was uplifted, and tilted towards the north, would have flowed in a south-north direction, unrelated to the underlying east-west structures. The course of the Cocknowle stream may have been disrupted as drainage developed in the unresistant Wealden Beds to the south, leaving the col at approximately 100m high as the only evidence of the former high-level course of the stream.

The dry valley heads at a height of almost 170m nearly a kilometre to the west of the high level col, and then descends steeply parallel to the ridge south of Stonehill Down. After the hairpin bend in the small road that crosses the high level col, the gradient of the valley eases considerably and makes its exit from the ridge at approximately 70m. It is likely that the course of this valley is structurally controlled, unlike the stream that flowed across the high level col.

Although no water flows in this valley today, it is clearly the work of a stream. Several alternative theories may explain why this valley is dry. Springs may have cut back into the Chalk along the suggested lines of weakness, and subsequent lowering of the water table caused the valley to become dry. Alternatively, deep frost shattering in the valley bottom, acting on Chalk already fractured during the mid-Tertiary earth movements, would have aided erosion by a meltwater stream flowing in spring and early summer over the Chalk rendered impermeable by permafrost.

Possibly, the valley may have developed in two stages: erosion in pre-glacial times by a spring working back along lines of structural weakness, and then further deepening by periglacial meltwaters at a later stage.

The geological structures that may control the orientation of the Cocknowle valleys were developed immediately after the Chalk ridge was formed by mid-Tertiary folding (the Alpine Earth Movements). This folding episode created the vertical Chalk limb (now expressed as the ridge) and compressed the Chalk into a relatively hard rock.

The hardened Chalk fractured along sets of planes in well-defined patterns. The orientation of the faults was determined by the direction of pressure from the south and the directions available for the relief of strain in the Chalk that the pressure produced. This relief was either east-west or vertical, probably depending on the amount of overburden (the overlying Tertiary strata). In this way the ridge could show high-angle faults cutting it along south-east to north-west, or south-west to north-east alignments. These result from the east-west relief.

The Ulwell gap, just north of Swanage, follows such a south-east to north-west structure. Additionally, with a different strain relief direction, the ridge would show low-angle east-west fractures. The cave-eroded fault exposed near the base of the Chalk cliffs west of Durdle Door is an example of this type of structure.

It is therefore possible that the prominent east-west valley at Cocknowle that turns abruptly to the north-east at its eastern end is the surface expression of a low-angle east-west fault intersecting a high-angle south-west to north-east structure.
(John Chaffey & Dr. Mike Cosgrove. DIGS April 2000)