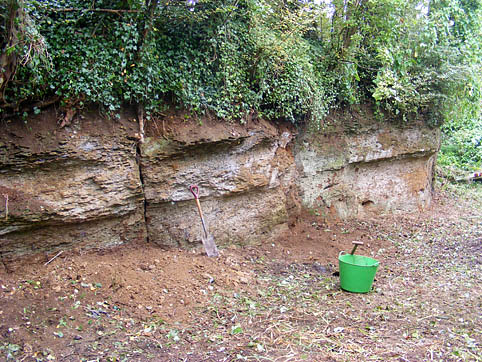 Geology: Jurassic, Kimmeridge Clay Passage Beds, Abbotsbury Iron Ore. The Abbotsbury Iron Ore is a unique deposit within the Cymodoce zone of the Kimmeridge Clay. It consists of an iron rich oolitic clayey sandstone. The section is cut by horizontal and vertical iron rich veins. The sediments yield fossil wood, bivalves, worms and brachiopods, indicating a shallow water nearshore environment, such as a subtidal barrier bar. This section was cut in the late 19th century in the course of an attempt to exploit the iron ore. The ore is in the form of chamosite, and proved to contain too much silica to be economically viable. This site should not be hammered, as it is irreplaceable.
Access: By prior arrangement e-mail us for contact details.

Parking: Two car parks, one by Swan Inn, one at Swannery.

Visit to site on 22.6.1997: Section recorded by Dr. Mike Cosgrove and Steve Etches.
On entering the site there are exposures of rock on the west side of the quarry running approximately NW-SE. Going north-west, this face merges into the original landscape – a valley running approximately WNW-ESE. This valley is steeply cut into the ironstone with good exposures on its southern side. It is here, at the western end of the site that the most complete section is exposed in an almost vertical valley side. The following section was measured – (Dip 25- 33o on a bearing of 190o):

Towards the quarry entrance, the upper 2m of the measured section forms the exposed western face. This shows well-developed dark millet-seed-like ooliths in a sandy matrix with dark red-brown veins cutting across the bedding. The latter tend to resist the erosion of the softer host rock which is weathered ochreous. The section yielded Rasenia, well-preserved wood (lignite) bivalves, gastropods and brachiopods.

In all there is some 100m of exposed quarry/valley side. The valley side opposite the near-vertical measured section showed only poorly exposed and weathered soft deposits. This lack of matching exposures across the valley suggests that the valley follows the course of a fault. Mike Cosgrove July 1997.

The disused quarry at Red Lane provides a section cut through a unique deposit, including the base of the Iron Ore in the valley to the north-west. This is therefore particularly important for scientific research.
The quarry as a whole also gives the opportunity for educational parties at all levels from junior schools through University to adult education to learn about past environments. The quarry is safe, and could even be accessible to students in wheelchairs if a path was provided round the perimeter, as planned by DIGS.