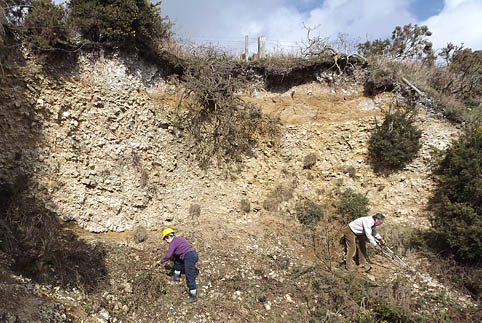 The Chert Beds of the Upper Greensand have been worked for roadstone and building stone in up to 15 open pits and 3 adits, since medieval days.

The ‘cobs’ were split for building using a small hammer with a long handle – the Hardown hammer. An iron bar with three claws was used to hold the cobs which were hung in wet hessian sacks to save the workman’s eyes, though they also wore wire goggles. The tenants on the hill had the right to two cartloads of hoggin, which was flint, sand and clay for the roads. An open pit is shown on the Tempest House Terrier of 1769, on the eastern side of the road to Whitchurch, and a large one on High Bullen on the tithe map of 1844.

The chert from Hardown can be seen in local buildings such as the churches at Stanton St. Gabriel (14th century), Whitchurch Canonicorum (11th to 19th centuries), Charmouth and Catherston Leweston (both 19th century), and in many domestic and farm buildings throughout the Vale of Marshwood.

Access: This pit, and the top of Hardown Hill, are owned by the National Trust, and therefore open access. Educational parties should contact the Charmouth office prior to their visit. If the gate is closed, please keep shut during your visit.

Parking: Take Gibbs Lane on the north side of the main road, and Verriott’s Lane to a small car park near the radio mast. The last part is unmade.