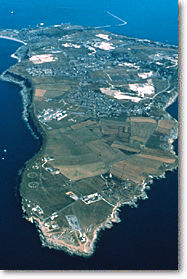 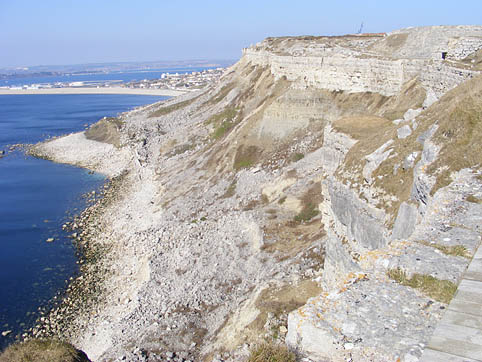 Part of the upper Kimmeridge Clay can be seen on the shore below the eastern cliffs, and the state of preservation of some of its fossils differs from exposures in other parts of the coast.

The best exposures of the Portland Sand in Dorset are in the cliff sections of the island, where locations on the western cliffs have given their names to several divisions.

The Portland Limestone can be seen in both the cliffs and the disused and working quarries.

The Freestone beds show a variety of different characteristics which change over a short distance, because they were deposited in relatively shallow water in reef and nearshore environments. Many of the quarries show the junction between the marine Portland Freestone and the brackish or freshwater lagoonal conditions of the Lower Purbeck in which dirt beds and fossil trees show that this was a low lying, flooded coastal area for a long period of time.

On either side of Portland Bill are Raised Beaches which formed during interglacial periods of the Pleistoene when sea level was higher than today.

The history of the Isle of Portland is closely bound to the development of the stone industry. Differing quarrying methods can be seen in the new and older abandoned quarries. In the disused quarries extraction of stone was done by hand and the waste left in piles within the quarry, or tipped over the cliff.

During the 20th century machinery has been introduced which has changed both quarrying and masonry techniques for the production of memorials and building materials. The waste rock is broken to provide roadstone so that nothing remains in the quarries.

The products of the Portland stone industry can be found in public buildings throughout England. 17th and 18th century buildings in London and Dublin were followed by a great expansion of the trade during the 19th century. The accessibility of cliffs, disused and working quarries throughout the island provides great opportunities for education in geology, geomorphology, history, and industrial archaeology.

Geological studies would include the structure of the Weymouth anticline, sedimentary environments, and fossils from the Jurassic, Pleistocene and recent times. The fossils include ammonites, bivalves and vertebrates in the Kimmeridge Clay; ammonites, bivalves, gastropods and vertebrates in the Portland Sand and Limestone; ostracods, insects, trees, fossil soils and mammals in the Purbeck Limestone; bivalves and gastropods in the Raised Beaches and mammal remains in the fissures recently formed within the limestone.

Current research has recently been published on the structural geomorphology of the Isle, on the mineralogy and evaporites of the Purbeck Limestone, and the Geological Conservation Review of the Portland Formations is now being conducted.
A new survey of the Island to include the habitats provided by the disused quarries for rare plants and the insects which feed on them, is to be conducted under the Jurassic Coast Project. The geological resource centre which is planned by the Project for the Isle will include all these interests, and provide a focus for the study of the geology of the whole County.
Although there are several Sites of Special Scientific Interest within the Isle of Portland, these are so fragmented that they fail to show a coherent picture of the geological history of the area. To identify the whole island as a Regionally Important Geological and Geomorphological Site will enable all past, current and future research to be co-ordinated. This whole-area designation imposes no statutory restrictions on quarrying, agriculture, commerce or daily life. It simply emphasises the importance of the island to scientific studies, and highlights its high conservation status. 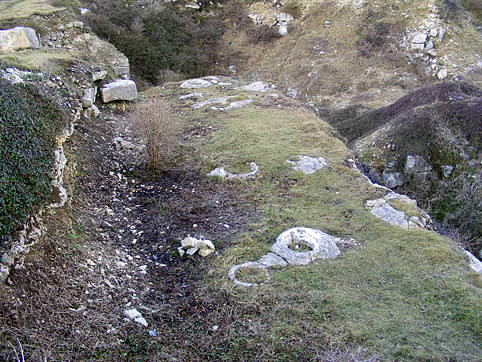