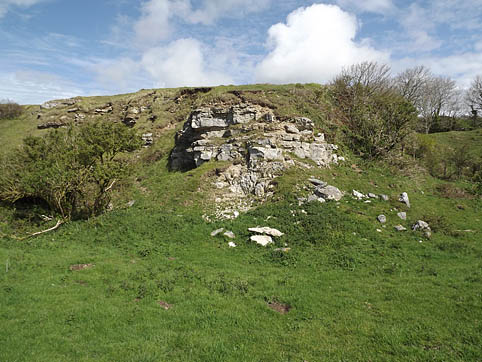 The front part of the quarry as seen from the information board shows the Portland Stone, overlain by the lowest Purbeck, as described below.

A further quarry face is hidden by trees to the right and above the first. This upper part at the rear of the quarry has not been measured or described by DIGS, or in the literature. It may include the Cypris Freestones of the Lower Purbeck,

The hill slope below the quarry is cut down past the Portland Sand into the Kimmeridge Clay. The Clay was mined for a short time during the early 20th century.At the end of the 19th century Strahan described the section as 11 to 13ft of Lower Purbeck beds above 15ft of Portland Stone. Arkell repeated this description in his 1947 Memoir. More recent studies of both the Purbeck and Portland limestones have included detailed sections drawn by the authors.

In 1995, after some excavation by the landowner and DIGS, the following descriptive section was measured by Jo Thomas of DIGS.

History
The quarry has been used since the 12th century, from the evidence of dated buildings. The Abbey at Abbotsbury, started in the 12th century has ashlar (large squared blocks) of the fossiliferous Portland limestone described above containing ooliths, shells and crystalline calcite. Athelhampton house was recorded as being built in the 16th century from Portesham quarry. The churches in Portesham and Abbotsbury, Waddon Manor, Corton Farm and chapel all have windows of the Portland Stone, while their walls are of the Lower Purbeck. The thinner, laminated Lower Purbeck is used for building in Portesham, with a little in Abbotsbury.
Stone from this, or other Ridgeway quarries eastward through Upwey to Poxwell, has been used in the Weymouth and Dorchester area, and northward through several river valleys. Both stones were also sold further afield in the 19th century, once the railway was built. The railway was built to transport the iron ore from Abbotsbury, about 1874, and an incline came from the quarry to the railway. An advertisement in the Dorset County Chronicle showed the prices of the stone at Upwey and at the quayside. The quarry was re-opened to build Hardy’s monument.
On the top of the hill the disturbed ground shows that the Purbeck limestone was more extensively quarried than the Portland. In addition there are numerous small quarries along the ridge past Waddon Manor towards Corton. Buildings here date from the 13th to 17th centuries.

The Portland and Lower Purbeck Ridgeway stretches from Portesham, between Weymouth and Dorchester to Poxwell. There were several quarries along its length, used for building stone. The Weymouth anticline to the south shows clay vales and limestone ridges, working south from Portesham they are the Kimmeridge clay vale, the Corallian limestone and sandstone ridge, the Oxford Clay vale, the Cornbrash limestone and Forest Marble limestone ridges. The Forest Marble is in the core of the anticline, and the succession is repeated in reverse order as you move through Weymouth and onto Portland.

At present arable to the south, with sheep and cattle on the higher Purbeck/Portland ridge. Historically the arable may have included hemp and flax for the Bridport rope and sail industry.
Suggested Sources of Information:
Bridport Museum and Bridport-Gundry rope makers.
Portland and Purbeck quarry histories for quarrying methods.
Dorset County Chronicle 1872 for records of building railway – Dorchester reference library.
Dorset County Chronicle for records of shipping stone – Dorchester reference library.
Geological descriptions and references for more details.
Arkell WJ 1947, p. 145. Strahan’s description.
“11 to 13 ft Lower Purbeck beds above 15ft of Portland Stone. At the base of the Purbeck beds are two irregular and undulating layers of laminated limestone separated by a thin shaly seam. Above is a tufa in great irregular masses up to 4 ft., resting on a thin irregular bed of dirt with lumps of chert and irregular masses of white marl. At the top are 4-6ft of laminated limestone (‘slatt’).
Strahan observed that the tufa masses were replaced horizontally as well as overlain by laminated limestone, and he saw an erect tree-trunk about 8ft high standing with its base in the Dirt Bed and in a slight depression in the laminated limestone below the Dirt Bed. The trunk was embedded in an irregularly cone-shaped mass of structureless tufa. The gigantic tufa sheath of a prostrate tree-trunk, measuring 14 x 4.5ft figures in Strahan’s memoir, can still be seen in the floor of the western extension of the quarry. It has curious annular ribs, difficult to explain”.
References:
Arkell WJ 1947: Geology of Weymouth, Swanage, Corfe & Lulworth. Memoir of the Geological Survey UK, p. 117-8.
Barker D, Brown CE, Bugg SC & Costin J 1975: Ostracods, land plants and charales from the basal Purbeck Beds of Portesham Quarry, Dorset.
Palaeontology 18, 419-36.
Brown PR 1963: Algal limestones and associated sediments in the basal Purbeck of Dorset. Geological Magazine, 100, 565-73.
Frances JE 1983: The Dominant Conifer of the Jurassic Purbeck Formation, England. Palaeontology 26 (2), 277-94.
Pugh ME 1969: Algae from the Lower Purbeck Limestones of Dorset. Proceeds of the Geologists’ Association, 79, 513-23.
Strahan A 1898: The Geology of the Isle of Purbeck and Weymouth. Memoir of the Geological Survey UK.
Townson WG 1975: Lithostratigraphy and deposition of the type Portlandian.
Journal of the Geological Society of London, 131, (6), 619-38. Page 622 & figures 2 & 3.
Townson WG 1975: Lithostratigraphy and deposition of the type Portlandian.
Jour.Geol.Soc. 131, 619-38.
West IM 1979: Evaporites and associated sediments of the basal Purbeck Formation (Upper Jurassic) of Dorset. Proceedings of the Geologists’ Association, 86, 205-25.
Wilson V et al, 1958: Geology of the country around Bridport and Yeovil.
Geol. Surv. GB.
Woodward H 1895: The Jurassic rocks of Britsin. 5. The Middle and Upper Oolitic Rocks of England (Yorkshire excepted). Memoir of the Geological
Survey UK.

One thought on “Portesham Quarry”