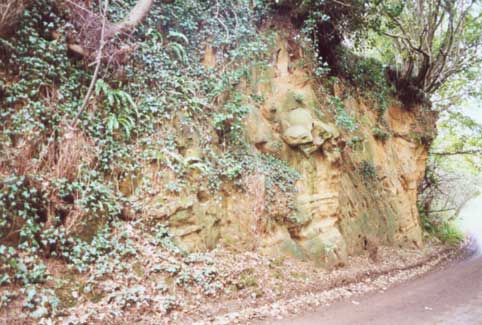 Geology: The underlying geology is exposed along the nearby cliffs between Eype and Burton Bradstock and consists of a sequence of clays, sandstones and thin limestones of Lower and Middle Jurassic age. However, inland, the distribution of the rocks is complicated by faults; fractures along which the rocks have been displaced.

Between Quarry Hill and Bridport two east-west trending faults have allowed a huge block of rocks to subside and this is why the landscape here is so different to the Marshwood Vale to the north. The southern fault runs south of Symondsbury across the southern face of Chideock Quarry Hill and roughly on the line of the main road; the northern one crosses Shutes Lane and Broad Oak road, leaving Symondsbury village in the downslip part of the “graben”.

The rock exposures along the sides of a group of sunken lanes running away from the village have been designated as Regionally Important Geological Sites (RIGS) because they cut through the different sands of the Middle and Upper Lias, as well as through the Junction Bed limestone. 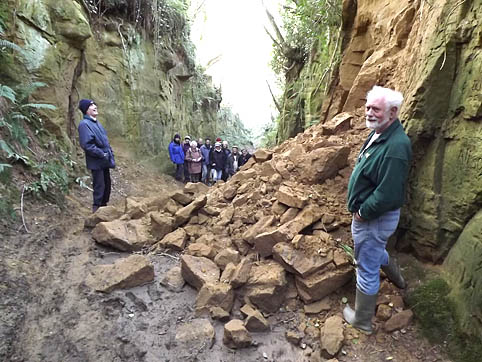 The steep sides of Shute’s Lane look mostly muddy, but if the vegetation is not too lush it is possible to see blocks of Junction Bed limestone. At first at about knee height, the blocks of limestone rarely reach more than one metre above ground level and it is soon obvious that the lane is following the dip slope of the rock. Near the brow of the hill only clay is visible. This is the Down Cliff Clay. As the slope levels out and the steep sides disappear, the view through the hedge to the south is of Colmer’s Hill. The conical hill originally had a capping of limestone to protect it, as Allington, Sloe and Chideock Quarry Hills have, but now it only has Bridport Sands above the clay.
On the right hand side of the lane the fields fall away into a gully cut into the soft Middle Lias sands, while the lane briefly follows the line of the northern fault. In the deep holloway after the cottage are rounded doggers (hard concretions of calcite-cemented sand) within the sandstone. These are the Middle Lias Thorncombe Sands. There are several rows of doggers weathering out of the sandstone.

The Down Cliff Sands can be seen in the cutting below Warren Hill. They are a darker colour than the Thorncombe Sands being brown or grey laminated sands with occasional small iron rich nodules. This exposure is on the northern side of the northern fault that runs across Shute’s Lane and Broad Oak road.

Find out more in our guided walk leaflet