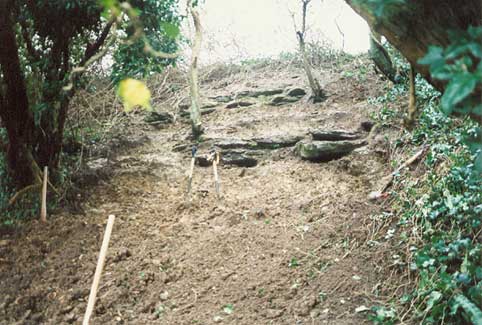 The old quarries on the hill south of Bothenhampton were working for many centuries to provide an excellent building stone. The limestone is made up of millions of broken shells cemented together with crystalline calcite so as to provide an almost waterproof stone. The crystalline calcite has been formed by the dissolution of calcium carbonate from the broken shells and its re-crystallisation to form a solid limestone. The beds of this limestone, known as Forest Marble because it will take a polish, are not continuous, but seem to have formed as shell banks in a shallow sub-tropical sea.

The stone from Bothenhampton (known by its old name of Baunton) was specified for many 19th century buildings in the area around Bridport. The same stone was also quarried east of Burton Bradstock, at Longburton and near Stalbridge. The strength and “waterproof” quality of the Forest Marble has been utilised for foundation stones in areas where other stones are used for the walls of houses, barns and churches. It has also been used for bridges, and for the walls of mills where a water-wheel provided the power.

Many maps of Bothenhampton parish have shown the quarries, which previously extended along the hill to the east. A description published in 1894 (Woodward, p. 342) gives little indication of the quality of the limestone:

It would seem that either the quarries were long-disused or the writer was not interested in building stone. Nowadays the one face comparatively unvegetated, that has been designated as a Regionally Important Geological Site, is seriously degraded and only shows a few thin slabs of limestone. The excellent stone seen in local buildings is in rectangular blocks up to 18″ thick that must have been cut from substantial beds. The site is of historical interest even though the exposure of the Forest Marble is inadequate for scientific study. If the face could be cleaned it would be more valuable.
(DIGS (JT) 11.2.2003)